skip to main | skip to sidebar

DEATH OF THE PLANET OF THE APES teased!

DEATH OF THE PLANET OF THE APES ILLUSTRATED NOVEL
Written by Andrew E. C. Gaska
Art by Various


George Taylor joined the Air Force to see the world, hoping to find somewhere that was better than his home. Instead, he discovered that mankind was the same everywhere - brutal, selfish, and masochistic. After a mysterious and unknown craft crashes during the Korean War, and his fighter squadron is caught up in the cacophony that follows, Taylor realizes he just might have his chance to find something better. Taylor becomes a rising star in a top-secret mission of space exploration, one that will take him far beyond the earth and mankind. Far beyond the reaches of time itself.


Set during Beneath the Planet of the Apes, and flashing back to the origins of  ANSA’s mission to the stars,  BLAM! Ventures second foray into the Forbidden Zone follows Taylor’s lost journey and eventual capture by the mutants who inhabit the underbelly of the irradiated remains of New York City-- a tale never chronicled until now. But before he gets there, Taylor will discover the ultimate secret of the Planet of the Apes, hidden deep within a futuristic gleaming technological megacity beyond the Forbidden Zone-- a city  inhabited by an advanced civilization of half human/half ape hybrids!

In Ape City, rumors persist of humans capable of speech. Newly minted chimpanzee animal-rights-activist Liet leads an organized protest against both the orangutan ordered extermination of mankind and a gorilla war with an unknown enemy. That protest sends waves of revolt throughout the community, until all chimpanzees stand united against their caste overlords.

A rescue mission launched from the twentieth century to find Colonel Taylor goes awry, leaving astronaut Brent stranded on the Planet of the Apes, slowly losing hold of his sanity.

In the catacombs beneath the Forbidden Zone, an exiled gorilla and orangutan fight to survive against savage cannibalistic creatures.

Elsewhere in the Zone, chimpanzee engineer Dr. Milo finds himself on the brink of achieving a scientific breakthrough thanks to his latest discovery: Taylor and Landon’s lost spacecraft. Calling for help from his friends, Cornelius and Zira, and utilizing parts from a second ship found smashed into the desert floor, Milo works to resurrect the space vessel and challenge both the scared scrolls and the simian laws of science by taking flight in a vehicle built by a technologically superior man.

But the ape army is already on the march, and the mutants they war against are readying the Alpha/Omega bomb in defense, an atomic weapon capable of cracking the Earth’s crust like an egg. When Taylor escapes his mutant prison with the help of fellow astronaut Brent, only to lose Nova, the one woman he has come to care for throughout his entire life, both apes and mankind find themselves facing the Death of the Planet of the Apes.
Posted by Unknown at 12:22 AM

Hello! Please feel free to make your comments here. No flame posts, please - if you have a different opinion than the author, feel free to comment, but in a positive and friendly manner. We are all fans here, and all positive discussion can only lead to a new awareness of the potential of our favorite franchise. As soon as your comment is looked over by an admin, it will be approved and posted. Thank you! 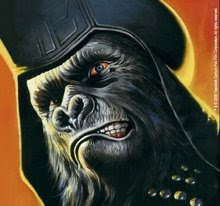 Go ahead, human, click on me!
Planet of the Apes and all related content ™ & © 2009 Twentieth Century Fox Film Corporation. All rights reserved. All other content © 2009 BLAM! Ventures, LLC.

Got a question? Need an answer? Let us know!